The colours of death … Black White or Grey ?

The colour of death is it black, white or grey ?

During Dying Matters week we have had many great events across the whole of Staffordshire exhibitions, poetry collections, virtual autopsies,  death cafes, coffee mornings,  pop-up shops, bereavement workshops, conferences and even a Dead or Alive Iquiz.

Hundreds and hundreds of conversations, people writing on chalkboards all the things they might want to do before they die, the conversation boards with people writing down what scares them, the Dying Matters Playlist and the Dead Good Staffs Podcasts.  Encouraging those who are reluctant to plan for the future and talk to about death and dying. Working with those who are more comfortable with conversations to encourage others to reflect on “ What can you do ? “

Part of our week has been to have pop up shops in the middle of town, we had a big market stall, a chalkboard, a large black limousine and we had a beautifully decorated white coffin. Our volunteers were from many different professional disciplines, including palliative care nurses, counsellors, funeral directors, volunteers and student doctors representing a multi-disciplinary approach.

As people approached the display they fell into three main behaviours

Talking to people about this most intimate of subjects is poignant and moving; in the middle of town you find yourself connected to a stranger, a stranger who shares the same hopes and fears, connected to the humanity that comes from the most human experiences of dying, death,  grief and bereavement. It feels quite profound.

Yesterday in the warm glare of the afternoon sunshine, I  spoke with young girl aged about 8 who wanted to write a song on the coffin for her Nana, who was called Julie.  She explained to me that her Nan had died a few weeks before and they had played  You’ll Never  Walk Alone at her funeral. She also told me a really poignant story of going with her family to Blackpool, going to the end of the pier and everyone throwing a flower and a letter to Nan into the sea. She told me that her Nana Julie would always have the letters to read wherever she was and she would know she was loved. She told me this story in really matter of fact way but towards the end of the story large searing tears appeared in her eyes. 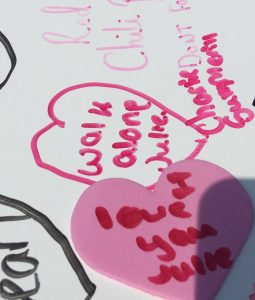 There were also two young children with their dad who wanted to write something for their Auntie Ann, they too wrote “You’ll Never Walk Alone “ which was played at Auntie Ann’s funeral. As  they walked away they were proud of the photograph that their dad had taken and they wanted to go home to tell their mum about remembering Auntie Ann.

These were young children as ease with death, keen to embrace the notion of remembrance, ritual and saying the name of those they loved who are dead.

It was humbling and reassuring.

There was also the conversation about the black limo and the white coffin. This was a very different conversation to any other that we had.

A lady came towards us asking who had given us permission to be in the town, she proceeded  to explain that when she saw the black limousine she had rushed to see if it was the mayor arriving. She had been disappointed when the black limo did not contain the mayor. She was also outraged  that it was a “funeral car” she thought it had no place in the town. What was the difference?  it was the same car, what made it so disarming if it contained the mayor?  but without the civic connection the black limo became something which caused offence ? 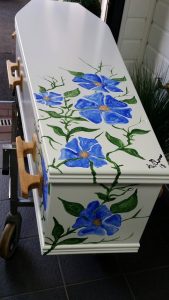 We had a conversation where we acknowledged our differences of opinion. She went on to explain how people in the town didn’t need to be told about death and dying and how they needed something to cheer them up as there were so many empty shops it felt like the town was dying. It seemed that the black limo and white coffin had other economic related associations and symbolism.

The colours black and white have some very definite preconceptions as in the case of funerals, death and dying. I myself don’t think it’s quite that simple. Death and loss isn’t black and white.

Death and loss is so personal that’s its everyone’s very personal hue of grey, a greyness through which people can experience learning and a new perspective on life.

For all the conversations I have had this week the one about the black limo and white coffin exemplifies how much more work there is to do to break through the black and white. We need to help people find and gain acceptance of greyness. As for the lady we agreed to disagree; I apologised if the black limo and the white coffin had caused her offence and explained that was not the intention. I did not however, apologise for them being there in the town.

Dying Matters asked us What Can You Do ? … You can continue the work we have started this week and keep the momentum going … taking us from either spectrum of black and white and to move us all to an acceptance of the greyness of death, dying, grief and bereavement.