For years Seth and I talked of getting a dog but always came to the same decision that its wasn’t fair to have a dog and work full time.

When Seth died seven years ago, I longed to get a dog but doing lots of travel for work, I meant that it wasn’t really feasible and too much of a responsibility to arrange day care and overnight boarding.

But then along came the pandemic; with months and months of working from home, in isolation no contact with people. The need to have something in the house with me that was living became overwhelming. November 2020, I want to see a litter of grey Staffordshire bull terrier puppies.  I went with the intention of finding a female puppy there were two, one was a little rotund and one a little slenderer.  I chose the rotund one.

I had planned to do the Big Step Forward in 2020 in support of Pancreatic Cancer UK. The pandemic got in the way and it seemed like the wrong time to ask people to sponsor me.

So, 2021’s Big Step Forward was the perfect opportunity for me and for Gertie to walk in memory of Seth.

We decided to walk 49 miles across the end of June into July and that would be one mile for each year of Seths life. The final few miles of the walk would take place on the 17th of July the date of the Big Step Forward and Gertie and I planned to walk four miles around Westport Lake.

I’m really pleased to let you know that Gertie walked 49 miles and raised £1082 in memory of Seth for Pancreatic Cancer UK. She was ably assisted by my work colleague and friend Sian and her beautiful dog Lily who joined us as part of Gerties Gang. On the 17th of July, Sian and Lilly were joined by my gorgeous friend Gail and her husband Steve; my friend Charlotte who makes the purple rainbow podcasts and Maria and Fran two of my dear friends and we walked the final couple of miles around the lake on the hottest day of the year. We also recorded a live purple rainbow podcast about why it was so important to raise awareness of pancreatic cancer; the signs the symptoms and the dreadful statistics, the podcast will be out soon.

Scrolling through the Big Step Forward Facebook page. my heart is broken by the number of people who share their stories of a loved one who died. I am very familiar with the statistics but despite knowing the figures; that one in four people die within a month; three in four people die within a year. It is absolutely heart breaking to read each of the stories that are shared on the page. Stories of husbands, wives, brothers, sisters’ aunts, uncles, cousins, mums, dads, grandads’ grandmas, sons, daughters’, nieces, nephews, across the full range of relationships and of loved ones. As you read the stories the human impact, the emotional turmoil, the desperation of inevitability, are all palpable in the stories that you read.

Each day 28 people are diagnosed with pancreatic cancer and for every 10 people diagnosed one gets the opportunity of life saving surgery, two get chemotherapy and the remaining 7 get no treatment whatsoever. Pancreatic cancer is the 11th most common cancer, the fourth biggest cancer killer, 45% of people are diagnosed in emergency settings and the survival rates have barely changed in the last 50 years and currently the five-year survival rate is 7%.

All of these figures never cease to absolutely wrench at my heart.

When you put them all together with the personal stories of lost lives; lost to the desperation of a terminal diagnosis, of the hope of survival, no one could be could be could fail to be moved by the devastation and the impact of this dreadful disease.

When Seth died, I vowed to share our story with three aims in mind.

2 was to improve end of life care across

That’s been the focus of my work over the last seven, that work has become, #sethslegacy.

Thank you for your support and for the money donated to Pancreatic Cancer UK you can be assured that they will do everything in their power to ensure that they gain the most impact from each pound that has been raised.

Reading all those stories of pancreatic cancer diagnosis that have been shared on the Big Step forward Facebook page makes me humble, makes me angry, but it also makes me proud to be part of a community that is so dedicated to collectively share the experiences of patient and families affected by pancreatic cancer and to raise awareness.

A huge thanks from me to the delightful, delectable and often demon like #GorgeousGertieG I love her dearly and she has made such an impact on my life in more ways than one. 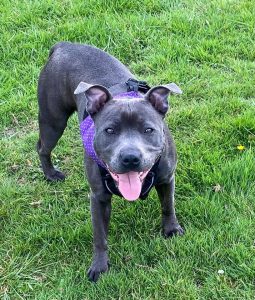