My fundraising for Pancreatic Cancer UK started when Seth’s friends at Npower did a “Do Something For Seth Day” to raise funds just a couple of weeks after his diagnosis. They raise £1250 and that was matched by a donation from Npower. From here I decided to raise £1k for each year of Seths life so set myself a target of £49,000.
Many activities followed and you can trace them all here in the fundraising timeline.
One day I was thinking about how could I offer something for people to buy that would raise funds and awareness and I thought about a mug, everyone uses a mug I thought. However I wanted one that was classy that would be elegant that would include the theme of the Purple Rainbow.
Living all my life in Stoke on Trent the home of potteries, the place from where the ceramic industry was born, with the work of Wedgwood, Spode, Minton, Doulton and Aynsley there was lots of potential as all these factories had put the town on the map.
The potteries industry started in Burslem the mother town a semi rural town where the locals started to make butter dishes from the local clay to store the butter made from dairy farming. In more recent years the number of pot banks has reduced considerably with many now manufacturing abroad.
In local terms Emma Bridgewater was a relative newcomer. Setting up manfacturing in the town thirty years ago after painting some polka dots on a plain ware cup as present for her Mother. Creating her own design as she could not find the product that she was looking for. Her single cup has turned into a thriving business and now her hand sponged pottery is much sought after and has a very strong collector base.
That was it ! The Emma Bridgewater factory was the place to start and I knew an ex work colleague who worked there, the phone call was made to see if bespoke design could be made to raise funds.
The answer was yes and the wonderful Purple Stars design was created,  a Facebook page was set up  and through an Emma Bridgewater collectors group an interest In the mug was established.
The order was placed and I set about coming up with a process to sell them and get them to their new owners.
The Purple Rainbow website was set up boxes, tape, bubble wrap and packing paper were ordered and the delivery was expected in early June 2016. I spent hours unpacking the mugs one by one and storing them in the lounge, then the sales went live on the website …. 300 orders in the first day I was overwhelmed by the response. I was also overwhelmed by the volume of orders but set about printing off orders, packaging them and taking them in batches to the post office.
The post office staff were great they let me drop off sacks of parcels during the day and then at the end of the day I would go an pay the postage. It was the same routine day, after day after day until all the orders were satisfied. We sold 1000 mugs within four weeks and it had been a great success.
The following year the same again but with volunteers at Pancreatic Cancer UK packing and sending them out the mugs again sold out within three weeks.
So 2 years later with over 2000 mugs sold and over £14,000 raised for Pancreatic Cancer UK we are branching out with a new product.
A milk bottle vases in Purple Stars went on sale on Tuesday at 9pm and by 7am all the stock (500) milk bottle vases had sold out and within 24 hours over 700 had been sold taking pre-orders from the up coming delivery at the end of May. I am stunned and very grateful for the response.
The Purple Stars mugs and now the milk bottle vases have raised much needed funds but more than that they have raised awareness of a disease that has such poor outcomes.Through my work with the mugs I met many many people affected by pancreatic cancer and those whose loved ones have died have shared heartbreaking stories of late diagnosis, inoperable cancer and devastating loss.
There is Claire whose father died from pancreatic cancer and 2 years later, the inconceivable happened when her mum was also diagnosed and unfortunately she too died. Another lady called Claire whose mum was diagnosed with late stage pancreatic cancer, saw Claire rearrange her wedding within a few days so they her mum could be there, the wedding took place and her mum died the next day.
The mugs have been delivered to families around the world who have experienced the loss of pancreatic cancer, people are enjoying tea and coffee in Italy, Netherlands, Canada , the USA and our furthest traveled mug is in Valdora on the far side of Australia
There have been mugshots, a photography competition and lots of awareness raising.
One the nicest things about the mugs is that people often send me messages saying “I was drinking from my mug today and I was thinking about you and Seth” or “I had my drink today out of Seth’s mug.”
Seth would have approved he loved a cup of coffee, out of good mug and he would be proud that one tiny idea has turned into something that has reached many people, it’s made people happy, it’s help share stories of pancreatic cancer, it’s raised awareness of the disease and its raised much needed funds and moved us forward towards that target of £49,000.
But in addition to all of this it has been in memory of Seth Goodburn the man I love with all my heart 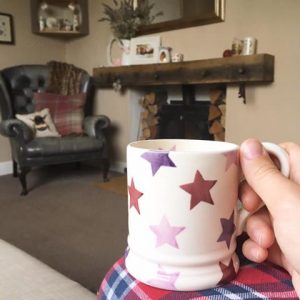 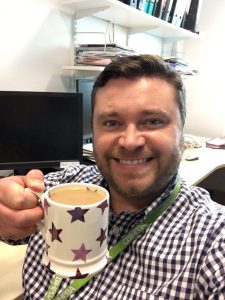 Christian and his mug 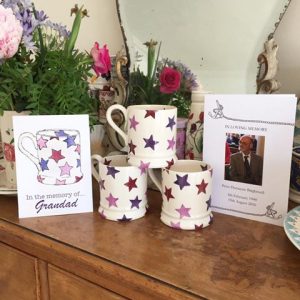 In memory of a wonderful Grandad

Don’t miss your chance to get the beautiful Purple Stars milk bottle vase from  www.purplerainbow.co.uk in memory of Seth and to raise funds for Pancreatic Cancer UK. 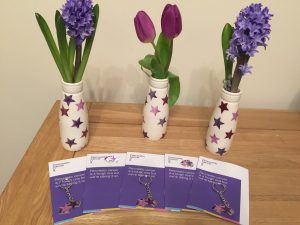 P. S A huge thank you to the Emma Bridgewater Factory for supporting our fundraising.