Homeward Bound a play, a film and educational resource about love, relationships, empathy and compassion at end of life. But it’s so much more too, it’s a catalyst, a mirror, an irritant to allow people to see what’s really happening and it’s Seth’s and my personal story the story of 33 short and heart-breaking days which resulted in my world being ripped apart.

At the Association of Palliative Medicine Supportive & Palliative Care Conference in Bournemouth at the end of a packed first day of exhibitions and presentations Homeward Bound was performed.

The power of narrative was evident from the moment the introduction started, an introduction that explains how time is an emotion not a concept and how quickly time can slip away when you are suddenly thrust into a world of palliative and end of life care.

As the performance began and the audience concentrated on the two actors you could instantly see the effect of the story on people, a stillness and intensity descended and as the story intensified towards the last days and hours of Seth’s life; a quiet sadness is visible on the faces of the audience. Some of the audience wipe away a tear.

By the end of the performance the combination of the emotional connection and the impact of the music, you could see people in the audience quietly self-reflect both professionally and personally about the impact of the link to compassion, empathy and the importance of relationships.

The applause faded and there was an awkward silence; one that is broken by the chairperson who asked people to talk to the person next to them for a few minutes to discuss the impact of watching the play. Then the chairperson asked if anyone has any questions and then the awkwardness returned but then someone is brave enough to break the silence and ask a question … a question that must feel quite intrusive. But once the silence is broken others joined in and the questions started to flow and you can tell that the power of the story has touched the audience.

As the hall emptied as with every performance there are people who come to greet me, to ask a question that may not have felt comfortable to ask in public, or to share a personal insight that they might not have been happy to share in a public arena.

What struck me about last night was that many of the people who approached me at the end of the performance started with an introduction that said “I am only a junior doctor”  “I am just a palliative care consultant at a district general hospital”  “I only work in a hospice” there were lots of diminutive words like “only” and ” just”.

The power of Homeward Bound is that it creates an emotional bond; it allows people especially healthcare professionals to imagine what it might feel like if they found themselves in the same situation as Seth and Lesley. But more than that it gives them an insight into how the weight of the NHS system can feel impersonal and how staff working in the system can sometimes find themselves in the routine of end of life care. For the person who is dying and their loved ones this is the most important time; a time when they need support, care, compassion and the connection to the humanity that everyone possesses.

For staff  to feel less diminutive, less “just”, less “only”, something within the system, the organisation and the supporting leadership has to change; to help the people who deliver compassionate care every day see that they are not “only” or “just” they are in fact the most amazing and important people.

Homeward Bound has power and reaches out to front line staff; it provokes them to change just some small aspect of care that will make a difference to a person who is approaching the end of their life. Homeward Bound also has the power to the change things at a systems and organisational level, it has the power to evoke compassion, it can help develop more compassionate leadership, more compassionate organisations, more compassionate systems where the wonderful people who work in them don’t see themselves as “only” and “just” but a where they are recognised for the work they do every day that makes a difference to someone who is dying.

About 150 people watched Homeward Bound last night and if each one of them left the performance with one personal reflection and an action that they would change as a result of hearing our story it might just help them see that they are not “only” and “just”, to see that they “are”, they “are” important and do the most important of jobs.

That’s the power of and potential of Homeward Bound; that’s Seth’s compassionate legacy. 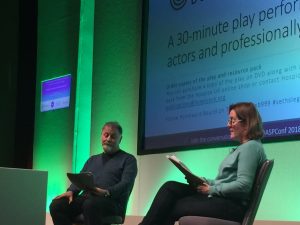