I was going through my wardrobe pulling out anything that was purple. It was late October and I was preparing for pancreatic cancer awareness month with a plan to find 30 purple outfits so that I could do thirty days of purple in memory of Seth.

As I was getting to the back of the wardrobe, I noticed there were thin pencil lines on the side panels, thin pencil lines that Seth had made when he was measuring up to make the custom-made wardrobe for me. The thin lines seemed so poignant, like Seth’s physical presence they were there but a little faded after 14 years of living in the house and five years of living without Seth…. the pencil lines bought tears to my eyes. It’s what happens at the most unexpected times, just when you least expect it and I have learned that it’s part of the grieving process. When it happens, it takes you by surprise, it wrenches all of the air from your lungs, you struggle to breathe as the pain consumes you. It takes you back to the hours, days and weeks immediately after Seth died where the pain was so visceral, so raw, so intense, that breathing seemed like a herculean effort. Five years ago, it seemed like trying to continue living was such an overwhelming thought that I literally got through, each minute of each hour, feeling like that was an achievement just to breathe.

The pencil lines got me thinking… for months I had been asking people on social media to do #something4seth and so many people and organisations had pledged to take action to help raise awareness of pancreatic cancer.

It seemed that although Seth was no longer physically here, his presence was bolder, thicker, more prominent through #sethslegacy on social media. Seth wasn’t a faint faded pencil mark; he was the reason for people taking action to raise awareness of pancreatic cancer. Strangers …people I hadn’t even met who had been moved by Seth’s story pledged to raise awareness to join a group of people who had an emotional attachment to our story. People who I didn’t know anything about, just a username and profile photo on twitter.

Seth is as present in my life today as he was five years ago just in a different way, don’t get me wrong I don’t set the dinner table for two and pretend he is here with me … honestly, I don’t. He is still here with me and his love spirit and humour guide me. Everything I do feels to me like I am doing as I always did as a joint endeavour with Seth, we are both sharing our story and making an impact on peoples understanding of the disease, improving end of life care and helping people recognise the emotional and psychological support.

So as pancreatic cancer awareness month draws to a close, I am immensely proud of the work we have all done across the month, in partnership with all of the people and organisations who pledged to do #something4seth.

Collectively the awareness raisers who have been doing #something4seth have put up posters in 24 organisations, ran 16 awareness stalls, 40 people have shared all six of the Purple Rainbow podcasts, there have been 11 education sessions, 5 coffee mornings, 12 people have worn purple and there have been 8 performances of Seth’s story.

In addition there have been impromptu activities with Dudley hospital having a Cake and Samosa day and raising another £700 and a lady called Jennifer who I have never met has run a half marathon, and at a work meeting the other day four people turned up wearing purple in support of #Sethslegacy

I am truly overwhelmed by everyone’s support it means such a lot to me.

So, it’s a huge and humble thank you and I am especially grateful to everyone who contributed to the Purple Rainbow Podcasts which came from Canada, The USA, Australia as well as closer to home from Shaun in Liverpool, Lucy in Essex and Juan in Manchester.

This month too I have had six people get in touch with me to say their friend or loved one has been diagnosed with pancreatic cancer this awful insidious disease is relentless and we have to continue to get the messages out there one by one, tweet by tweet, conversation by conversation we can make a difference

Somewhere along the way on social media I came across this quote and it seems to sum things up like those faint pencil lines in the wardrobe……grief and loss never goes away. 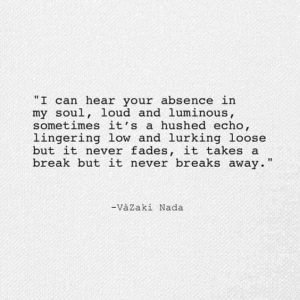 Pancreatic cancer are the two words in the English language I loathe and about 18 months ago I made myself a promise that I would never use the words pancreatic cancer without balancing them with the words Seth’s legacy.

Seth this month all the activity was for you, in tribute to the dignified and selfless way you faced your terminal diagnosis and death and a promise fulfilled, in sharing our story. That promise over the last five years has become Seth’s legacy and Seth I will love you with all of heart forever.