At the start of this week there was the sad news that Steve who had shared his story of  his pancreatic cancer diagnosis in one of our Purple Rainbow podcasts had died. I didn’t know Steve personally but listening again to the podcast hearing his infectious enthusiasm for life with his wit and humour made me smile. Then seeing him and hearing his voice on his TV interview promoting blood donation made me very sad, you could see how he had deteriorated physically and you could hear a much subdued enthusiasm in the timbre of his voice.

This reminded me of the fragility of Seth’s voice in his last few days, a voice that could barely be sustained by his dying body.

Then there was a film I went to see called Dead Good which was about more progressive and less traditional funerals; it was a beautiful film. It took you on a  journey with three different people who were arranging funerals for their loved ones. One of the people featured was a lady whose brother had died after suffering from mental ill health intermittently over a number of years. His latest decent into mental ill health had been prompted by the sudden death of their older sister just a few weeks after a diagnosis of pancreatic cancer. This part of the story upset me the most because I could feel the pain of the loss so keenly, both of the sister from pancreatic cancer but also how the psychological impact of her death had affected her brother. It made me cry, it made me angry and it made me sad.

When Seth died I had  promised him I would do something to raise awareness of pancreatic cancer and support people diagnosed. So one of the first things I did was set up a support group called Purple Rainbow to support people across Staffordshire. I worked with the upper gastrointestinal nurses from the Royal Stoke Hospital and we launched the group in July 2015 just a year after Seth’s death.

We had a number of people come along to talk, share experiences and get support from each other and from the nurses.  There was a mixture of people with their disease being at different stages, some getting palliative chemo, some having just finished chemo after surgery. A stark contrast of people with a dark and heavy realisation of their impeding immortality and those with the uncertainty of balancing worry with hope after surgery and treatment.

Over time one person died and then another and more followed I suppose I know it’s the reality of the disease but regardless of which it’s hard to take….time after time ….after time. Then we had just one person coming along to the group, a person who had been diagnosed early, when the cancer was at stage 2, where surgery and chemo has been successful, the person who beat the odds.

We didn’t get any new members and for a few months I often went along and no one turned up. It was disheartening and I was about to call the group a day, but then after a discussion with the nurses we decided to press on … to change things, dates, times, locations add in processes and different communication.

We relaunched the Purple Rainbow Support Group but by then I had returned to a full time job and I knew getting to an afternoon meeting would be difficult. So for a few months the nurses covered the meetings, then finally I was able to get along to a meeting. It was quite emotional on Wednesday meeting all of the people, people with pancreatic cancer and their loved ones, people post surgery but still receiving chemo, people post surgery looking forward to a life beyond pancreatic cancer and inevitably people who know that heartbreakingly palliative treatment is the option for them.

I was humbled to meet everyone and was pleased to share Seth’s and my story and explain to them why the group has been called Purple Rainbow. For those who don’t know it’s because purple is the colour of pancreatic cancer awareness and rainbow because Seth’s favourite quote was from Maya Angelou “Always try and be the rainbow in someone else’s cloud” . We used that quote as part of Seth’s funeral service and it summed up his approach to his life and what he wanted me to do after his death. 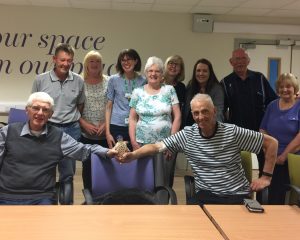 I suppose it would have been easy to give up on the support group but I am so glad we persevered because it means so much to the people who go along. It makes me proud because it’s exactly the kind of thing that Seth would be very proud of too.

Today I was at a storytelling in health conference and went to workshop about using narrative to improve services for cancer patients. The facilitator talked of a model to capture patient and family feelings at point of diagnosis, at the time of deciding treatment and then when the decision is made to move from curative to palliative treatments.

I asked if they had done any work with cancer patients where there was a late diagnosis with a short prognosis, he replied no they had tried but it was difficult. The one person they had spoken too was a lady diagnosed with pancreatic cancer who was too traumatised to speak and who died within a month. It felt inevitable but in some weird way; I had expected him to say something about a pancreatic patient and subliminally I had a feeling he was going to use a pancreatic cancer example… it was synchronicity, a weird expectation fulfilled.

Again today in the session I was angry, sad and despondent.  I am acutely aware of disease, it’s survival rates, its devastation, it’s unrelenting silent progression. But feelings still creep up on me and they stab me in the heart. This evokes incredulity and deep sadness when I think of my adorable Seth and how quickly this dreadful disease killed him.

Every year nearly 10,000 people die from this disease, that’s 10,000 people like Seth and Steve; people who have family who love their someone as much as I love Seth

Just that thought leaves me with a feeling of heady uncertainty, that all encompassing grief, that feeling of having such deep love for someone it creates this visceral pain in loss that is indescribable.

Things have to change and sethslegacy has to be part of effecting that change.

Seth was tone deaf his singing voice was awful;  truly bad but I remember very clearly in the days before we were a couple Seth singing karaoke at a works do. He sang Love is All Around by Wet Wet Wet and despite the fact he was part of a trio even two others voices couldn’t rescue his dreadful singing.

Today as I left that workshop it felt like pancreatic cancer is all around and I can’t get that thought or the tune out of my head.

This blog is dedicated to the memory of Steve Essex 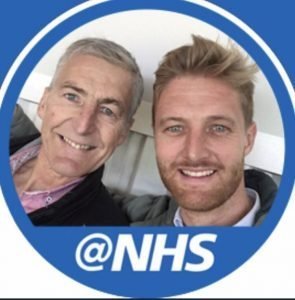