Is It About My Attitude ?

I could go on quoting time, but time was exactly the issue when he was diagnosed…. the issue was that there was no time, the time had already passed for anything to make a difference, the symptoms hidden for so long had now burst into view, with devastating impact.

Time just slipped away like water through our fingers, nothing to stop it, nothing to help … nothing just …. nothing…… but death.

Seth was told he had days optimistically weeks to live, I can remember looking at all the stark, petrifying statistics on the web and quickly coming to conclusion that at best Seth had about 8 weeks to live. I hoped I was so wrong, I hoped that some miracle treatment would materialise and save the day, now I know just how unfounded and ridiculous those thoughts were.

Eight weeks meant 56 days, as it happened, I was wrong we had just 33 days.

Over the years I have heard myself say to people, that Seth would not have dealt with an earlier diagnosis, he would have been angry, intolerant of treatment, he wouldn’t have wanted the uncertainty of hope. He would have struggled to live with the tiniest possibility that there might be a chance, that possibly might never be realised, that was the chance of survival. Knowing him the way I did, I know that he would have been resentful, impossible to support and petulant.

Seth was a fatalist. I remember him once saying when we are having have a “normal” everyday conversation about dying and death, before there was any hint of illness, that he would die from some awful insidious cancer…. I remember the words striking me to the core.

Years later he turned out to be so right…. I wonder if there was some sense of foreboding, some innate fatalism. Who knows?

Today at a conference I heard a lady called Katarzyna from Poland talk about her diagnosis of stage four metastatic pancreatic cancer. It was 2014 was the same year as Seth’s diagnosis, 8 years ago. I did a double take, with all manner of thoughts running through my head…. but most people who are diagnosed at a late stage, die within a month of diagnosis was the overriding one.

Katarzyna has had six surgeries, five rounds of chemo, clinical trials, remissions and 96 months or 416 weeks or 2920 days of struggle balancing hope with fatalism. She thought that the cancer was in remission twice, but it took hold, metastasised, and then receded, giving that glimmer of hope. That possibility of a future. 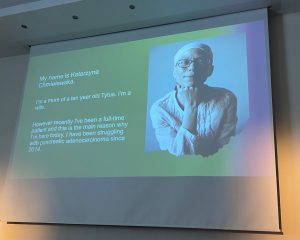 How do you live in that fine balance between hoping the for best and living with the reality of such stark statistics? As she recounted her story  to the people assembled Katarzyna said “I lost my hair but not my spirit or hope “ she also described the importance of her husband and son and eight years later she is still here to say that in person.

Seth was cremated 8 years ago; his ashes sit in a beautiful purple pot on the bookcase with little deposits of ashes left around the world in all of the places we should have been able to go to visit together. But there are no longer any visits together, because Seth has been dead for 2920 days. 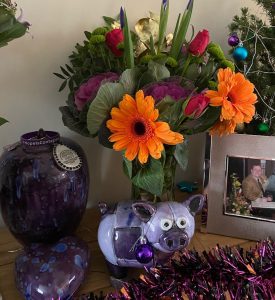 Katarzyna, asked three questions at the end of her story she asked why she was still fighting after 8 years of hope 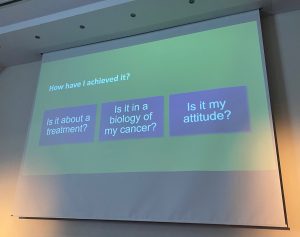 I don’t think Katarzyna, or anyone in the room could answer with any confidence, I suppose it’s a combo of them all, but I know her attitude has probably paid a bigger part than perhaps the other two.

It made me think about my hypothesis that Seth wouldn’t have coped with treatment.

It is true, I know it is true……but as I sit here and write this with tears streaming down my face, I know I would love Seth to have had the same journey as Katarzyna and to still be by my side 8 years later. I would trade anything for just one minute, hour, day with him. Seth and his love are deeply embedded in me, they drive everything I do, and I know that deep the love manifests in the impact of Seth’s Legacy

Katarzyna finished her story by saying she still has stage four pancreatic cancer but that she only has seven areas of metastasis, after 6 surgeries, five rounds of chemo, immunotherapy, and despite at one point weighing only 44kg. All this after 8 years of living with an illness balancing hope with fatalism. However, her seven areas of metastasis went skiing with her in the Alps with her beautiful 10-year-old son and her much adored husband, a concept that was unthinkable eight years ago. 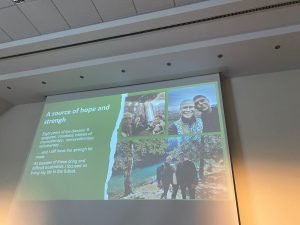 I am so pleased to have met Katarzyna and to have heard her story,in which she shares hope for others, she shares the love that is so obviously integral to her story, and she shares her amazing attitude in dealing with this disease.

Katarzyna and her story hold a place in my heart.