What a difference a year makes

This time last year I was nervously waiting to go to London for the launch of Homeward Bound the film and the educational resource. I had decided to turn Homeward Bound the play into a film that would make our story more readily available to more people, to give it the accessibility that the play alone could not achieve.

There was a small part of me thinking is this really the right thing to do?  Is this what Seth would want? Or would he think that sharing our story via the play was enough? It’s hard making these kinds of decisions when the person (Seth) you would normally turn to for support is the person whose story you are sharing. Especially when the story is in memory of your soulmate the one person who meant most to you in all the world.

Homeward Bound has elicited stories of reflection, palliative care consultants who have shared how they have reflected on their conversations about DNACPR, nurses who say they will always remembers Seth’s story and how the little things become the big things for people approaching the end of their lives. By staff across healthcare settings who now talk about have important, courageous and brave conversations with people instead of difficult conversations, and by students who say that seeing the film will make them better doctors in the future.

I am so proud of all that’s been achieved and I have had the pleasure of working with so many passionate and committed people who want to improve end of life care. My aim has always been to share our story in Seth’s memory to honour his amazing bravery, selflessness and unfailing love and to build a legacy in his name; a legacy that encourages humanity, connection and compassionate care for people approaching the end of life.

Up and down the country there are 100s of Seth’s and Lesley’s who are faced with the trauma of a terminal diagnosis and who despite everyone’s best intentions do not get the level of care that the NHS aspires to. So sharing Seth’s and my experience is a way of being able to vocalise amplify and generate change on behalf of all those people who don’t get the opportunity to make their voice heard. 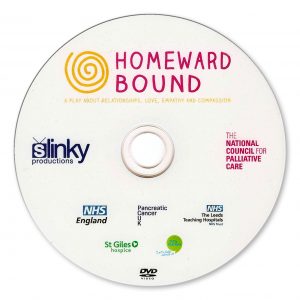