A Beacon of Hope – Ellen from Copenhagen

This post came up on Facebook memories today December 2nd 2020 and I thought it was a reflective, hopeful and inspiring post. It acknowledges the despair, pain and powerlessness but accentuates the hope for a future where more people can survive this disease and shows the power of shared experience and connection.
Today (November 2018)  I walked into a room of about 200 people, people from all over Europe drawn together by a disease, one you may well have heard of … called pancreatic cancer.
When I share Seth’s and my story via Homeward Bound I am always deeply affected. I stand up there in front of people I look like I am in control, like someone who is determined to make a change but underneath that veneer is a woman who connects to deeply distressing feelings, feelings of loss and despair. A woman who replays how desperately frightened Seth must have been when he was told alone….. that he had terminal late stage pancreatic cancer and that he had days may be weeks to live.
It traumatises me when I think of him all alone with such devastating news, for two hours he held that revelation, then I came to visit him and it fell to him to tell me that devastating news. The devastating news that he was going to die.
Today one of the 200 people in the room in Amsterdam knew exactly how Seth felt, she too got a terminal pancreatic cancer diagnosis, she too was told when she was alone. She too sat alone with similar devastating news, in a hospital that was a long distance from her home. In that distant hospital, alone, frightened and full of dread, she wrote goodbye letters to her husband and her sons. She told them how much she loved them and what she wanted them to do when she was no longer here.
The letter writing lady was called Ellen, she lives in Copenhagen and she wrote those letters five years ago. Her husband and sons never got to read those letters, because despite the diagnosis and the abysmal prognosis,
Ellen went on to have her pancreas removed, she had months of chemotherapy and she now lives with type 3 diabetes.
But today she was one of the people in the room in Amsterdam and after she heard Homeward Bound she came and gave me the biggest tightest hug that anyone has ever given me.
She told me that she felt guilty that she was still alive and that Seth was dead, she told me she knew how frightened Seth must have been. There was a deep connection between us because she knew how much I loved Seth and she knew how much he loved me… she knew because for a few short days she was in Seth’s position with no hope.
But tomorrow she will be flying back to Copenhagen to buy her Christmas gifts, to prepare for another Christmas that she never thought she would see.
Pancreatic cancer is cruel and it often feels hopeless but Ellen is a beacon of hope, of the hope that we need for the future and I am so glad we made that deep connection today. 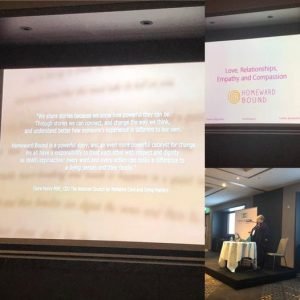